What Does a Cold, Wet Dog Nose Mean? 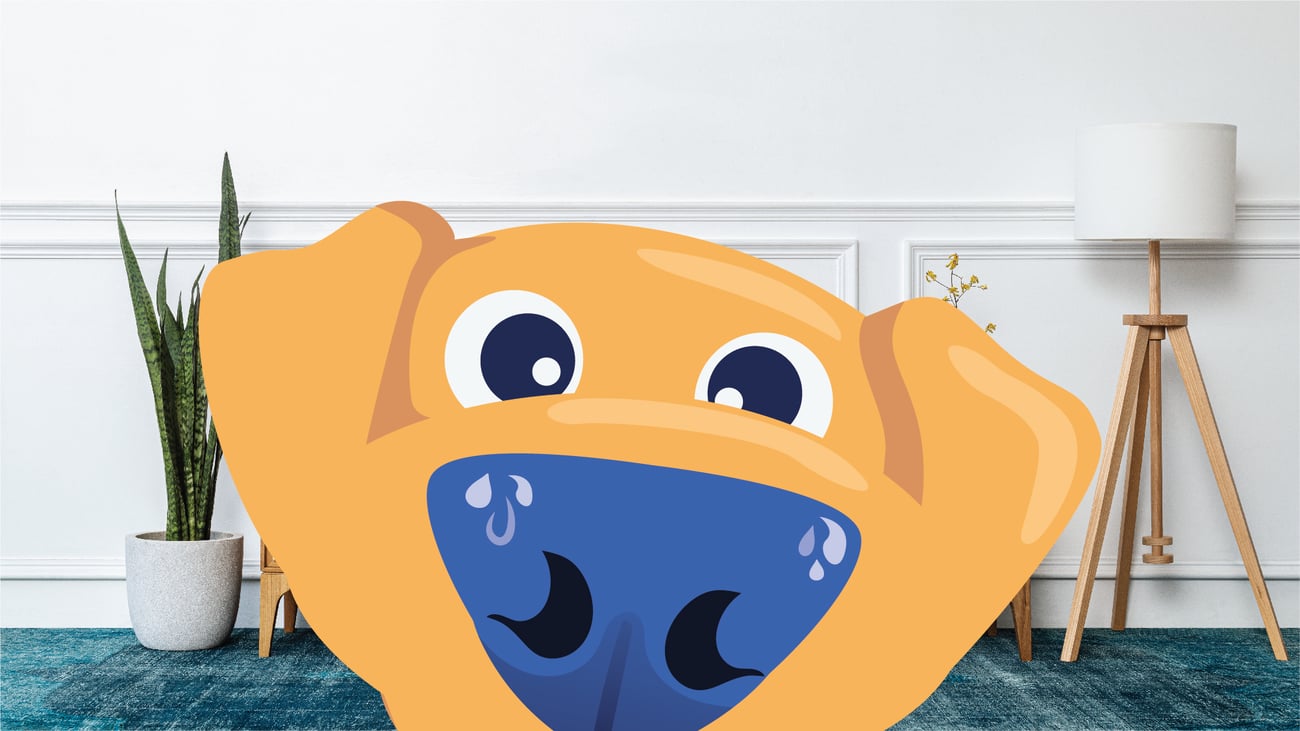 Maybe you’ve heard that a cold wet dog nose is a sign of good health and are wondering if there’s truth to that. Or maybe you’re a pet parent curious to learn more about your pup’s anatomy. A dog’s nose is one of their most prominent features! With an excellent sense of smell, dogs rely on their noses to help them navigate and explore the world and creatures around them. So when meeting a dog for the first time, it’s no surprise that they’ll give you a sniff first. You’ll come to find out that there is a wide variation in the feel and appearance of noses among dogs, and this is completely normal and expected. A dog’s nose is often cold and wet, but this does not necessarily mean that they are healthy. Likewise, a warm dry nose does not always indicate illness. Let’s take a look at how dog noses work, what a cold wet dog nose means, and when to be concerned.

Why are Dog Noses Cold and Wet?

A cold wet nose is often considered a sign of good health, but in reality, a dog’s nose can be cold and wet for a variety of reasons. While there are both normal and abnormal reasons for a dog’s nose to feel this way, there are actually several benefits to having a wet nose if you’re a dog.

Dogs have an amazing sense of smell. They have up to 300 million scent receptors (vs. our six million), a highly developed area of the brain dedicated to analyzing odors, and an additional area on the roof of the mouth between the top incisors known as Jacobson’s organ to enhance their sense of smell. By keeping their nose wet, dogs are further able to take advantage of this amazing tool.

Simply put, scent particles stick better to a wet nose than a dry one. Dogs also frequently lick their noses to bring scent particles into their mouth where Jacobson’s organ is located.

Dogs have minimal sweat glands (located in the paw pads), but they have developed other ways to cool themselves down. Part of the process involves dilating blood vessels to send hot blood to their heads, ears, and elsewhere around the body to cool off via the process of convection. As moisture evaporates from the nasal passages and tongue when a dog pants, it also helps them keep cool.

How do Dog’s Noses Get Wet?

You’ve probably seen your dog lick their nose, and it’s one of the main reasons their nose is often wet. As dogs are constantly sniffing things and getting their noses dirty, they clean them frequently with their tongues. Dogs have also learned that a wet nose helps facilitate their superior sense of smell, and they use their tongue to bring scent particles into their mouth to Jacobson’s organ.

Just like our noses, dog noses secrete mucus to keep the nasal passages moist. This helps improve their sense of smell and aids in cooling their bodies. Mucus is also a line of defense to trap particles such as dust, allergens, and bacteria from entering the lungs.

Dogs use their noses to explore the world around them so it’s no wonder that they end up sticking their noses everywhere. Often their noses get wet in the process.

Excessive nasal discharge may be a sign of an upper respiratory infection, foreign body, or nasal tumor. Excessive salivation (or lip-licking) can occur due to nausea or other underlying systemic diseases. Some dogs may also lick their noses more frequently as a symptom of anxiety or a partial seizure. All of these things can lead to a wet nose.

What Causes a Warm Dry Nose and What Does it Mean?

Dogs may have warm dry noses for a variety of reasons as well, and it does not always indicate an issue or underlying illness.

Your Dog Has Recently Been Napping

Dogs often have warm dry noses after waking from sleep, either because they were not licking their nose while they dozed, or because they may have been napping in the sun or by a heater.

Sun Exposure or Other Environmental Factors

Warm, dry, or windy environments can also lead to a dry dog nose. Sunburn is also possible, especially in dogs with light-colored coats.

This is a condition where the skin becomes abnormally thickened, hard, and cracked. It is most frequently seen on the nose and paw pads and is more common in brachycephalic breeds (those with short faces such as pugs) and older dogs. It can also occur in several disease processes such as distemper.

A warm nose can be a sign of dehydration and/or fever, but this is usually accompanied by other clinical signs as well. Symptoms of fever often include decreased appetite, lethargy, and depression.

Fevers in dogs can be caused by many things, including viral or bacterial infection, inflammation, cancer, immune-mediated disease, reaction to vaccines or toxins, and fever of unknown origin (a condition that involves extensive testing and veterinary treatment).

If you are concerned that your dog may have a fever, you can check their temperature at home or schedule an appointment with your vet. If you need help taking your dog’s temperature, you can schedule a video consultation with us and a veterinarian can talk you through the process. A normal temperature for a dog is 99.5 to 102.5 degrees F. Anything above that range can be a fever, but slight variations may be normal for your dog or due to excitement, recent physical activity, or stress. If your dog has a temperature over 103, they should be evaluated by your vet. If their temperature is over 106 this is a medical emergency and they will need to be seen right away for immediate treatment.

What Changes to a Dog’s Nose Could Indicate a Problem?

If you notice any of the symptoms listed below or you are concerned about your dog’s nose, it’s best to schedule an appointment with a veterinarian.

Loss of Pigment and Texture

Several immune-related conditions (including multiple types of pemphigus and lupus) can cause characteristic lesions at the mucocutaneous junctions (where the skin meets mucus membranes), including the nose/nostrils. Typical lesions include vesicles or bullae (blisters), crusting, scabbing, scales, ulceration, hair loss, and loss of pigmentation and texture of the nose itself. While extremely serious, these diseases can often be managed with immunosuppressive medications. Zinc deficiency is also a possible cause of similar skin lesions around the nose, and is most commonly seen in Huskies and Malamutes.

Yellow/green/mucoid nasal discharge can occur for several reasons, including upper respiratory infection (such as kennel cough) or foreign body (such as plant material in the nose). Bloody discharge may be seen with foreign bodies, nasal tumors, rat bait toxicity, and bleeding disorders.

If your dog has a change in the feel or appearance of their nose as well as other signs of fever or underlying disease as discussed above, they should be evaluated by a vet.

A cold, wet dog nose is not a reliable indicator of health. Noses may vary from dog to dog, and in the same dog from day to day. You are likely very familiar with the typical feel and appearance of your own dog’s nose. If you notice one of the changes listed above or something that seems abnormal for your pup, speak up to your vet!

Does a Warm Dry Nose Indicate a Fever or Sickness?

No, while a warm dry nose can occur with fever or dehydration, it can also occur for many other reasons in healthy dogs. A dog with a fever will usually have additional clinical signs of a fever (such as lethargy, decreased appetite, and depression) and/or the underlying illness triggering the fever. To determine if your dog truly has a fever you may take their temperature at home or schedule an appointment with your vet. The normal temperature range for a dog is 99.5-102.5 F.

What Does an Overly Wet Dog Nose Mean?

A dog’s nose may be overly wet due to normal factors such as recently drinking water, licking/salivation, and normal clear nasal discharge or mucus. If your dog’s nose seems extra drippy, it could be a sign of something else going on. If nasal discharge is excessive, thick/yellow/green in color, or bloody, you should schedule an appointment with your vet to rule out upper respiratory infection, foreign body, or nasal tumor. If your dog is drooling or salivating more than normal it can be a sign of nausea or another issue that may require veterinary attention. 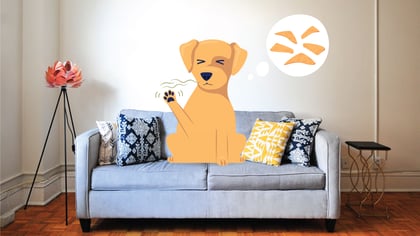 As veterinarians, we have heard pet parents say their dogs' feet smell like a variety of different...
By BetterVet Team
Pet Symptoms
2 min read 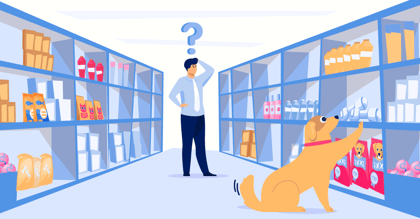 How To Understand Your Pet's Food Labels?

Have you ever wondered which food to feed your pet, based on the label? As soon as we walk into...
By Dr. Brie Beberman
Pet Nutrition
2 min read 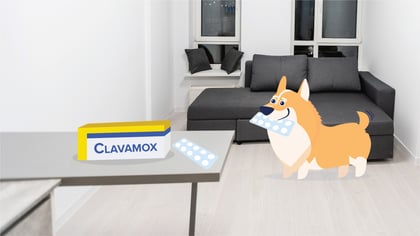 Clavamox is a commonly prescribed antibiotic for a variety of bacterial infections. If your dog has...
By BetterVet Team
Pet Health Care
4 min read